A movement against bullshit in business

Rob Rooney is a Creative Director/Copywriter at Rokkan.  His clients include MILKPEP (Got Milk?), Sprite, Diet Coke, Starbucks, Planter’s Peanuts, The Tribeca Film Festival, Comedy Central, LandRover, Cadillac and others.

He’s the co-founder of Over30Under30, a site that brings attention to ageism in the advertising industry and the owner of Anxie-tees, a line of snarky t-shirts designed to fight mental health stigmas.

I have to say I was a bit…um, judgy with people at the beginning of my career, and in one case it really came back to bite me on the ass. I’ll tell a story about Old Boss and New Boss.  Old Boss was my mentor and left the agency. I loved Old Boss and was devastated when he left.

Enter New Boss.  I didn’t like New Boss.  New Boss wasn’t Old Boss.  And right out of the gate I had a deep visceral reaction to the new guy and I basically… never gave the guy a chance.  So, I actively started looking to leave and did.

Well, as it turns out New Boss became very powerful and influential and had I just played along, put on my big boy pants, and screwed a smile on my face I could’ve made that relationship work for me.   Looking back, I wish I could’ve told myself, “Hey, you don’t have to love this New Boss.  Learn what’s worth learning from him and forget the rest”.

I try not to be so judgy anymore.  Everyone gets a chance with me now.  Sometimes two or three.  It simply doesn’t pay to make enemies in your career.  That old adage of be nice on your way up because you meet the same people on your way back down is very, very true.

This industry is weird and broken and uncertain and unfair.  But it is filled to the brim with fucking amazing people.  Find yours and hold tight to them.  That’s the key to success and longevity.  If you create a tribe of “business-pals”, then fuck-ups don’t matter much.

But in general, fuck ups do happen. To everyone. And 99.99% of them aren’t fatal. In fact, most are a learning opportunity.  So fall down, get back up, practice gratitude, and stay the hell off of Fishbowl.

Fear annoys me the most. It’s the cancer of my industry.  Why does 96% of advertising look like mediocre shit? Fear. Because our industry is a collaborative effort, in order to make anything worthwhile every single person involved in it has to commit.  And usually, someone along the line becomes afraid… afraid of making a statement; afraid of being too ‘out there’; afraid of upsetting their boss, etc…and the whole effort collapses in an instant.

Whenever I see really GREAT creative, my mind immediately goes to the meetings where they had to sell it.  I can imagine all the roadblocks and the naysaying and legal comments and I’m proud there are people in this industry who know how to navigate them. There are precious few of these amazing salesmen.  Coming up with great ideas is easy compared to actually selling them.

A good example, of what I’m talking about is this ad for Burger King. 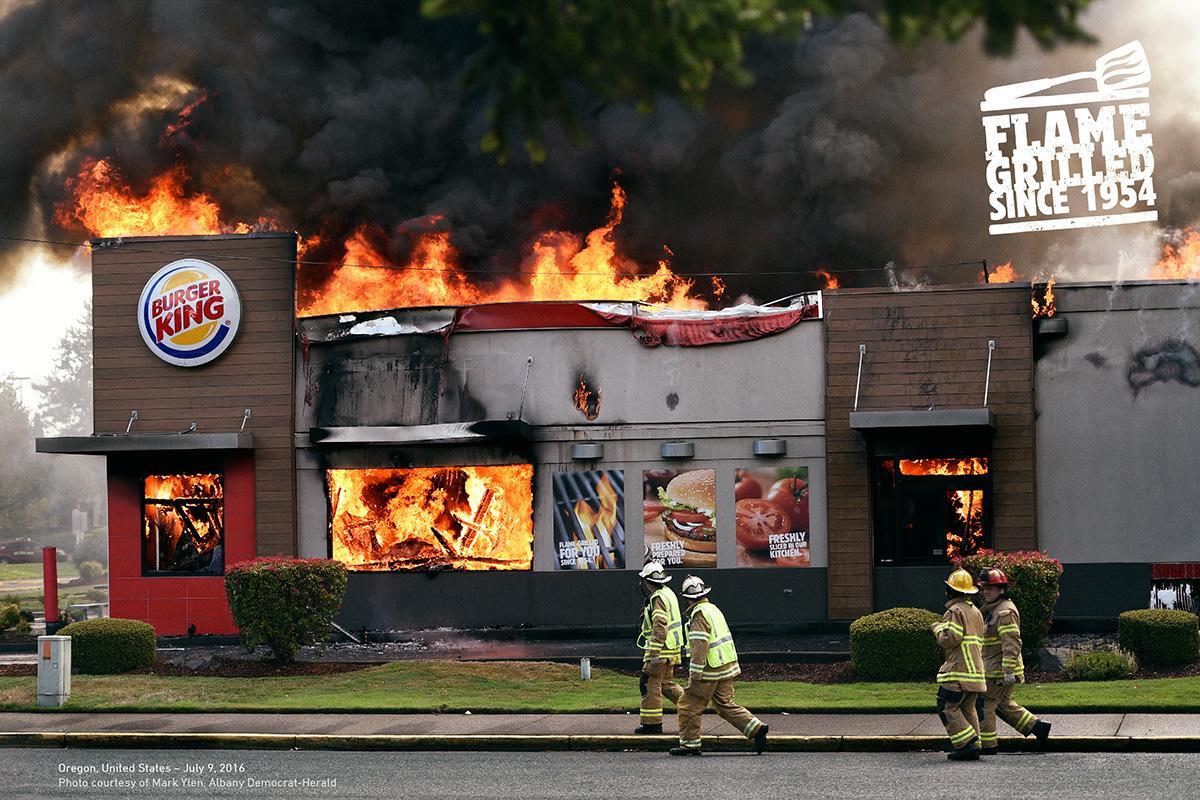 It shows a REAL PHOTO of an ACTUAL BURGER KING THAT CAUGHT FIRE to make a simple ‘Flame Grilled’ claim.  Can you imagine what any lawyer might say about approving this ad?  If you can’t, let me tell you:  They would say ‘No. No fucking way.’

Because that’s what lawyers do, they say ‘No’.  It’s literally their job.

This ad started as two creatives in a room going: Wouldn’t it be funny if we just showed a franchise on fire?  And after they laughed about it, they got brave.

I am in awe of the Burger King CMO.  He is a unicorn of a client.  The man clearly does not give a fuck about taking the safe road.  He does not make decisions based on fear.  Bravery like this has to start from the top of an organization and when it does…well, let’s just say I’m jealous.  So yeah, fuck fear.

I have this friend, his name is Justin Gignac and I’ve known him for many years.  And he’s tremendously successful.  (He’s one of the founders of WorkingNotWorking, a curated community of the best talent in the creative industry that connects them to companies like Apple, Google, Droga5, Airbnb, etc.).

I’ve known him ever since he was a junior art director and he’s just this creative goofball (I mean that lovingly, Justin).  But, I realized one day this goofball had this super-power.  And his super-power is: he actually DOES stuff.

What I mean by that is, from the very beginning he had all these weird ideas percolating and instead of just writing them down or saying, ONE DAY I’LL DO THAT, he just DID IT.

For instance, he had this idea:  I bet if the package was nice enough I could sell actual garbage, and he did.

Another one: What if I made a gold-plated anti-shoplifting tag? Again he did.

In fact, WorkingNotWorking was born the same way.  It started out as a little alert on his FaceBook page to let recruiters know he was available for work.  It’s now a company with a Board of Directors and dozens of employees.  All because he didn’t just SIT on his creativity, he ACTED on it.

So that’s my advice. MAKE SHIT.

This site uses Akismet to reduce spam. Learn how your comment data is processed.